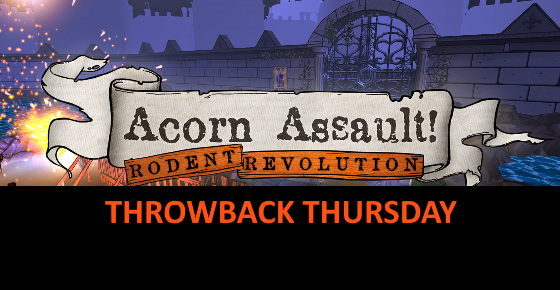 It has taken nearly three years, but Acorn Assault: Rodent Revolution is launching next week on March 2nd on Steam. We thought it would be fun to jump back in time to see how far this game has really come.

Let’s start from the beginning. Hot off the heals of ZomNomNom, we were ready to start our next game. We had some ideas of what we wanted to do such as doing something 3D and nothing with zombies. Don’t get us wrong, we love our first born ZomNomNom and all the wacky characters, but that market was very flooded and we needed something fresh.

Enter OUYA, the crowdfunding game console that came out of left field. The promise that developers can finally get their creations on the big screen with a real controller sold us. We backed them on Kickstarter and got the developer edition. Soon after, the fine folks at Ouya along with KillStream started a contest/game jam called the Ouya Create Game Jam where developers were encouraged to come up with a prototype for the console. We entered the game jam and cobbled together the first iteration of Acorn Assault with the bare-metal mechanics. We also threw together a trailer for the game near the end of the jam. We were very tired, but propped up by sugar and energy drinks when we put this together…

While we did not win in the contest, we got to hear from our first group of Acorn Assault fans who really enjoyed the mechanics and we knew we could grow this game into something more.

At this point we practically scrapped all code and art assets and rewrote the game from the ground up. The game jam version was functional, but the code was mostly hacked together for lack of time and we knew it would not be sustainable going forward. So with a fresh code base, came with a fresh face for the squirrels too. We came up with the French Revolution setting and a hand full of squirrels to go with it. The game had actual bases you were defending, rebel squirrels and a royal squirrel army. We launched the game with just a single environment, a basic AI to play against and online multiplayer.

With a much improved game, we decided it was worth coming up with a much improved trailer. This time we scripted cutscenes specifically for the trailer and rendered it all in-engine. We were very proud of it and with the help of our friend and music composer, Matt Norton, it felt like an epic tale of squirrel combatery. Combatery is a real word right? No? Anyway, here is the Ouya trailer…

And since this trailer doesn’t show any gameplay, here is gameplay footage from Timothy Graupmann who was a developer at Ouya at the time.

Acorn Assault finally felt like it came into its own and was a real game! We started finding more and more people who enjoyed the game which was very exciting. We have even heard that Ouya CEO Julie Uhrman loved playing the game with her children! After being featured on podcasts and blogs, our fans started reaching out to us. They wanted to know more about the squirrels. Why are they fighting eachother? What are the stories of the main two characters? And why the hell are squirrels in powdered wigs building sandbag bases and shooting rifles at eachother?! The answer was easy for that last one. It’s a video game, why wouldn’t squirrels be doing all these things? But for the other questions, we decided to answer in our followup to the Ouya title which would become Acorn Assault: Rodent Revolution.

Things this time around had to be bigger, larger and… nuttier. Okay, that pun was bad, but you see where we are going here. We generally had an idea for the backstories for these squirrels, but none of it was really fleshed out. We sat down and came up with a fun story for the games campaign mode. Ultimately we landed on a story five chapters long each with a unique boss and unique environment to play in, all (loosely) based off of the French Revolution. Each boss had their own powerups that changed how you would need to approach the game to allow the game’s merging mechanics to shine in ways not possible before.

We spent countless hours also tweaking the numbers, updating the UI, balancing the game and more which culminated into what is now Acorn Assault: Rodent Revolution. Again, as my uncle Ben would always say, “with new games come new game trailers” or something like that… Okay, I don’t have an uncle Ben, but neither does Peter Parker anymore. Too soon? Anyway back to the point. This time we learned from our previous two trailers and decided to go with one that featured both a little bit of story and a little bit of gameplay. After some masterful editing, and again some wonderfully epic music from Matt, we had another trailer. This time for our shiny new game!

Oh, did you notice that Xbox stinger at the end of the trailer? That is right! This game is coming to Xbox One later this year. We were able to get in the ID@Xbox program and I attribute it to the help of Ouya and our fans we found while on that platform. We will be coming to other platforms other than just Xbox One in the near future so keep an eye out on our blog for more announcements.

While we don’t have a solid release date for the Xbox One launch, we do have one for our Steam launch which will be playable on PC and Mac March 2nd. Look forward to a Linux version soon too.

So here we are. Three years later and with a game coming out on a plethora of platforms. While we are finally launching, don’t expect this to be the last of Acorn Assault: Rodent Revolution. We will be updating the game with new languages and region support along with new platforms. And we aren’t planning on ditching our furry cast, expect to see more of Charles DeMontesquirrel and his cast of friends and foes in future titles.

And before you go, go ahead and visit our Steam page. If it is before March 2nd, add the game to your watchlist, and if it’s after the game launches, pick up a copy for yourself!

Acorn Assault Rodent Revolution is Coming to Xbox One

Acorn Assault Rodent Revolution is Coming to Xbox One